In this article we provide an example on how COM can be abused and utilized as a means of payload execution and persistence on a target system during the post-exploitation stage. The technique presented in this article is documented as T1546.015 in the MITRE ATT&CK knowledge base and the related research was first published in virusBULLETIN [1]. The article is not intended to be a complete guide on how COM actually works, as the inner machinations of COM are an enigma to the author.

On its host system, COM maintains a registration database of all the CLSIDs for the COM objects installed on the system. The registration database is a mapping between each CLSID and the location of the DLL or EXE that houses the corresponding class. COM queries this database whenever a caller wants to create an instance of a COM class. The caller needs to know only the CLSID to request a new instance of the class. A CLSID Identifies a COM class with a unique 128-bit Class ID and associates a class with a particular deployment in the file system, which for Windows is a DLL or EXE.

The interaction between a COM object and its callers is modeled as a client/server relationship. The client is the caller that requests a COM object from the system, and the server is the module that houses COM objects that provides services to clients. A COM client is whatever code or object gets a pointer to a COM server and uses its services by calling the methods of its interfaces. There are two main types of servers, in-process and out-of-process. In-process servers are implemented in a dynamic linked library (DLL), and out-of-process servers are implemented in an executable file (EXE).

In order to abuse the COM functionality there are three paths one can take:

The first two options may affect system’s functionality, since we replace functional objects. However, we may look for objects that are not backed by resource present on the system. This may happen when for example an application has been uninstalled but COM Classes were left behind.

In relation to the first option, COM loads user COM objects registered in HKEY_CURRENT_USER\Software\Classes\CLSID\ prior to machine objects located in HKEY_LOCAL_MACHINE\SOFTWARE\Classes\CLSID\. The HKEY_LOCAL_MACHINE\SOFTWARE\Classes key corresponds to the HKEY_CLASSES_ROOT. By registering a user object we can achieve the loading of this object first and thus take advantage of the loading order.

The second path is pretty straightforward: replace a DLL or an EXE with the payload.

The third path is the one that requires research. In this article we focus on this path. Components of the operating system request COM objects that haven’t yet been defined in registry. Let’s call these requests orphaned requests. Using SysInternals’ Procmon we can harvest the orphaned requests, register COM objects for them, map them to our payload (either DLL or EXE) and eventually achieve persistent execution.

The harvest of orphaned CLSIDs

In order to collect requests for orphaned CLSIDs we utilize Procmon. To harvest as much data as possible, it’s suggested to enable boot logging. With this option, all events taking place during boot will be recorded. 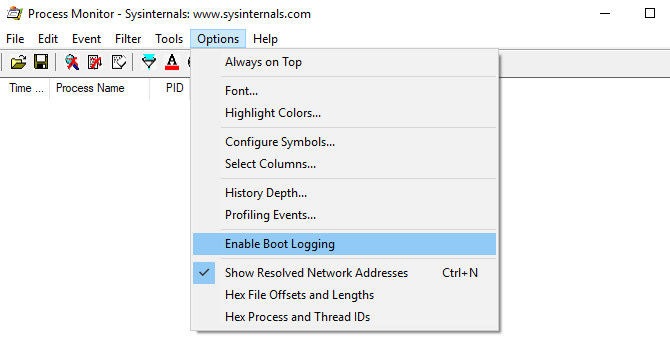 After the system boots, open Procmon and see the recorded results. We are using three filters in order to limit down the results to what is important to us. We can do this by looking in the results for the following three:

After we apply the filters we get a view like the following:

Results show that we got 54,594 RegOpenKey events that match the set filters. Take some time to go through the results and observe the processes that generated the events as well as the Paths. The recorded results are actually the requests made by a client to the COM server. What they have in common? They all are for orphaned CLSIDs.

Within the results we see Paths that end with InprocServer32. According to Microsoft documentation [3], InprocServer32 registers a 32-bit in-process server and specifies the threading model of the apartment the server can run in. InprocServer32 keys should be pointing to DLLs. If they don’t exist (aka NAME NOT FOUND) here is our chance to create them…and abuse COM!

Knowing this, we can further filter the results so that we focus more on keys that end with InprocServer32.

Would be good to point out that the results contain two root registry keys: HKEY_CURRENT_USER (HKCU) and HKEY_CLASSES_ROOT (HKCR). As we are going to create registry keys, we have to first check what privileges are required to create these keys. PowerShell’s Get-Acl command can help get the security descriptor and determine which user accounts can write to these keys.

We confirm that low privileged users can write to the root key HKCU. As HLCR is just a link to HKLM, we include the security descriptor of HKLM. So, assuming a low privileged user account is compromise, the way to go is to create a registry key in HKCU.

Setting up the goal

Thus far, we have identified requests for keys that don’t exist. We want to target specific keys that map CLSIDs to DLLs, so we’re looking for InprocServer32 keys. The next step is to get a CLSID, map it to a DLL then reboot the machine and see if the payload gets executed. The process consists of trial and error. You may choose a CLSID that at the end won’t launch your payload.

Create the (registry) keys to heaven

After a few tries, we picked up the CLSID {4234D49B-0245-4DF3-B780-3893943456E1}. Searching on Google or Bing for this CLSID, reveals [4] that this CLSID is used to open the Applications. You can simply hit Ctrl+r to open the run box and the following, in order to confirm that Applications is associated with the CLSID:

This means that everytime a user opens the Applications OR the operating system itself is querying this CLSID, our payload will get executed too.

Two registry keys and two values are required to achieve our goal. We create the following keys:

And the following values:

Note that the filename of the DLL does NOT have to end with .dll. A different extension can be used - even a random one. So we can plant the DLL in a directory with pictures for example or with other system files.

In this test, we used the PoC DLL payload that spawns Windows Calculator that can be found in this post. The effect is immediate, multiple Calculators are spawned as soon as we create the registry key. The parent process of the instances of Calculator is explorer.exe, which is what we expect if we consider that the request we captured with Procmon was generated by this process. If this payload DLL is a Meterpreter or a Cobalt Strike Beacon, you’ll get back multiple connections back from this host. This happens because the COM client makes multiple requests which are now served by the COM server we set up.

Dealing with the trouble: Multiple Instances

Multiple requests coming from the COM client are now being served and multiple instances of Calculator are being spawned from explorer.exe. And this is where the trouble begins. As you can imagine, multiple Calculators will be keep launching consuming system resources. What we can do to address this, is to account for this behavior in our code. That is, to check if our process is already running before we launch it. If it is running, then the code that spawns Calculator won’t be executed again. Right, just like a switch.

In the following code, after getting some help from docs.microsoft.com [5], we get a list of active processes using the CreateToolhelp32Snapshot API and if the process we want to launch is already running we don’t execute Calculator. This switch-like behavior reduces the noise to the bare minimum and leaves only a single instance of Calculator running.

* Any feedback on this article is welcome, method of communication is listed in the Contact page