Persistence 101: Looking at the Startup directory as attacker and defender

When attackers compromise hosts and plant malware, one of the key objectives is gain persistence. Writing a malware on a host does not warrant it survives reboot. In order to persist, the Startup directory can be used. Achieving persistence on systems running Windows utilizing the Startup directory is no news. The technique is also documented in the MITRE ATT&CK framework as T1060. In this article we revisit this technique (experimenting on a Windows 10 host), we present tricks that malware authors use and most importantly highlight what defenders can do to detect or hunt for malware that persists with this technique.

This technique only requires an executable file or a link file, that points to an executable, to be written in the following path:

Following a reboot or user-logon, the Windows operating system, executes the executable file(s) that exist in the path.

In order to experiment with this technique, we copied the Windows Calculator in the Startup directory, renamed it to ‘malware.exe’ and then rebooted the machine. Indeed, our copy of calculator was launched as soon as we logged in.

Since the calculator is an active process launched during startup, one would expect that tools like Process Hacker and Process Explorer would list this process. However, only Task Manager was able to show that Calculator was actually running on the host. The process is running under the context of the user account that logs on the host.

We did the same experiment again but this time we enabled the Boot Logging on Process Explorer. This time, the result is what we expected. The ‘malware.exe’ process was spawned by the parent process ‘Explorer.exe’.

Is there a way to execute a payload when we don’t want to directly copy an executable in the Startup directory or we want to execute a script instead (Batch, VBScript, JavaScript, HTML Application)? Then, the way to go is to either create a link file (shortcut) that points to the executable/script we want to execute persistently or just write the script itself in this directory.

Let’s think of the link files as containers that can be used to direct users to execute something they are not aware of. This rational is based on the assumption that a small number of users would ever right-click a link file and check the target path of this file. In the target path a path to malicious executable or to malicious script can be placed.

In this experiment, we copied the renamed Windows Calculator into the path C:\Windows\Tasks\ and created a link file that points to this file. As an additional step to trick the investigators/hunters we named the link file Microsoft Outlook. A link file with this name would likely not raise suspicion - even if it did, further analysis would be required. Have in mind that cyber operations contain forms of deception, exactly like what happens in real battlefields. We then placed the link file in the startup directory and rebooted the machine. Result? Our copy of Calculator - named malware.exe - is launched by Explorer.

Link files can also be used as a means to execute files that cannot be executed directly or binaries that require command line arguments. For example, a link file pointing to rundll32.exe can be used to execute a DLL planted by the attacker. Many Leaving Off The Land Binaries (documented in https://lolbas-project.github.io) can be used along with link files.

We did the same procedure but this time writing three scripts in the Startup directory. An HTML Application script (.hta), a VBScript (.vbs), a JavaScript (.js) and a Batch script (.bat). Each script is set to launch the legit copy of Calculator located in C:\Windows\System32. See below the code we used in each of the scripts. 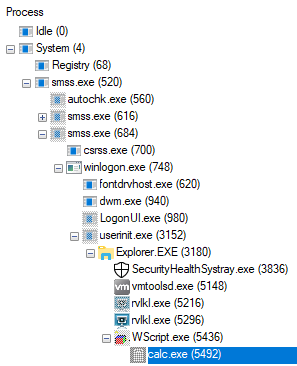 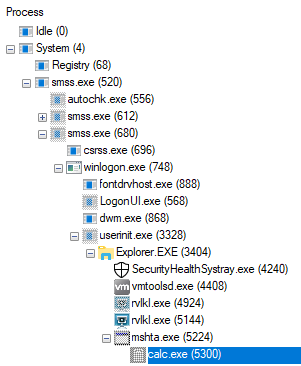 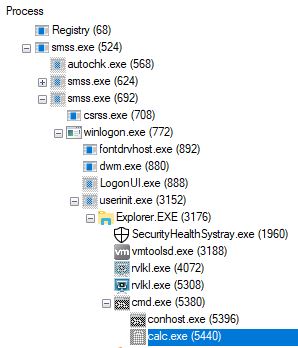 What the defenders/investigators can do to detect/investigate this persistence mechanism? There are certain things that can be applied:

In this article we touched one the most well-known persistence mechanisms, the Startup directory. We presented how executable files as well as scripts written in this directory survive reboot. We also showed the parent-child process relationship between the executed resources and finally provided recommendations to defenders.

* Any feedback on this article would be greatly appreciated