This page aims to document work around Kerberoasting (MITRE ATT&CK T1558.003 [1]) and be a point of reference for people interested into getting information around this attack vector within Active Directory.

Kerberoasting is an attack vector that both red teams and APT groups [2] use in their operations.

It enables attackers extract service account credentials as a low privileged user without communicating with the server that hosts the attacked service. Often, service accounts within domains are (mis-)configured with excessive privileges (for example they belong to privileged groups like Domain Admins) and therefore open the door to full domain compromise.

The article is layed out in the following sections:

In order to show the attack, it’s important to first understand the communication between three parties: the user’s host, the Domain Controller and the server that hosts the service:

In a lab environment a user account is required. This will be the account of the service starring in the Kerberoast scenario.

With access to a Domain Controller, open dsa.msc (Active Directory Users and Computers) and create a new user account. In my example, I created the following user account: 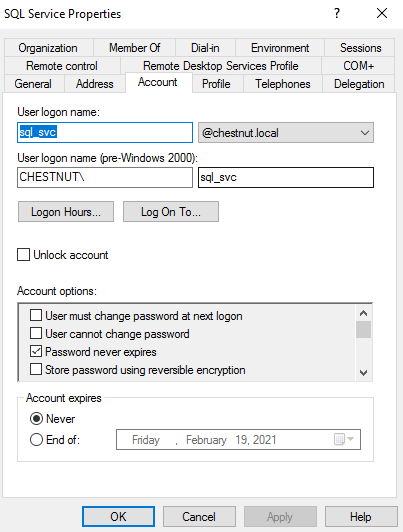 Associate a service account with a Service Principal Name (SPN)

In this specific example, sql_svc is the username of the service account.

We now have a SPN to work with in a testing environment!

In a domain in order to enumerate the available SPNs we can use a variety of tools. Assuming we have credentials for an account, we can use the tools listed in this section.

The native Windows utility setspn on a domain controller:

Or using an account domain or a domain-joined host:

On Metasploit, the module auxiliary/gather/get_user_spns queries the DC for the SPNs. Although, on my testing machine Metasploit didn’t parse the response from the DC, the network traffic on Wireshark shows that the SPNs are actually returned.

Impacket’s module GetUserSPNs queries the target domain for SPNs that are running under a user account:

Rubeus module kerberoast identifies accounts that can be kerberoasted as well as provides functionality to extract the encrypted part of a TGS-REP. It retrieves a list o kereberoastable account via LDAP queries to the Domain Controller, however it doesn’t use the same filters as Impacket does. More specifically, the command below identifies the kerberoastable accounts within the domain:

The following LDAP query is being made in the background: 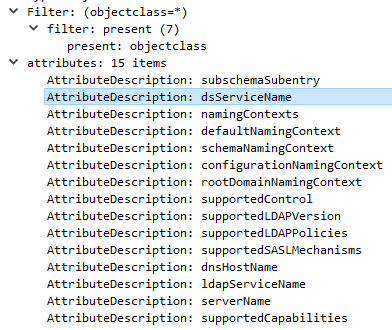 In order to retrieve the hash for a specific SPN with Rubeus the following command can be used:

In the following section another method of gathering SPNs by using the PowerShell ActiveDirectory module [3] is presented.

Enumeration of SPNs creates space for detections on the wire. In order to enumerate the SPNs, Impacket makes an LDAP query filtering for servicePrincipalName=* (ServicePrincipalNames) and objectCategory=computer (non-computer accounts). Detections are in place by Microsoft’s ATA [3] and the activity is detected.

The following screenshot illustrates the traffic that Impacket generates on the wire. Highlighted in yellow color are the key parts of the communication with the Domain Controller. The LDAP traffic is the query the tools makes to grab the available SPNs. Further down we see the Kerberos authentication request (AS-REQ) and reply (AS-REP). This is when the authentication of the user takes place in order to get a ticket (TGT). Further down, we see the client requesting a service ticket (TGS-REQ) and getting the service tiket (TGS-REP). The response contains the service ticket encrypted with the password hash of the service account.

The detection capabilities have led the attackers in changing their techniques or at least have second thoughts on using “noisy” techniques.

Instead of making LDAP queries to the Domain Controller, we can take advantage of the Active Directory Web Services. The following command is the equivalent of setspn -Q */*

A different - and less straightforward approach - would be to begin with gathering all the OUs within the domain:

Next, focus on a specific OU and get all the user principal names:

The above search fetches many reults and may require additional analysis to identify service accounts.

If you open Wireshark and let it run in the background while you’re invoking the above commands you’ll see that the traffic is not LDAP. It’s TCP traffic to port 9389. On a Domain Controller, the Active Directory Web Services (ADWS) service is running on port 9389. As such, it’s a vehicle of avoiding detections that may be in place for suspicious LDAP queries.

Use your situational awareness to make out which SPNs will help you achieve your objectives.

We can crack passwords using tools such as Hashcat and John the Ripper. Assuming the hashed service ticket (TGS) is in the file hashed.txt and that we use the well-known rockyou.txt password list, we run hashcat:

The same process with John the Ripper:

A list of the tools referenced in this article: